The Movie: Rock On

Plot Preview:
The movie oscillates between the successful present and the happy past of ‘MAGIK’.
Magik is a band formed by the four protagonists in their early twenties, when they escaped the quarter age crisis by doing the thing they wanted to do.
The band that rocked the crowd and set the stage ablaze moved apart for self centric reasons to give some of its members a successful and ‘well settled life’: the life without a calling.
The story takes you across the split and merger of MAGIK with the magic of meaningful music combined with a coherent sense of direction. 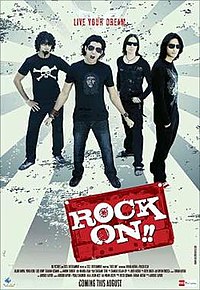 USP of Rock On: 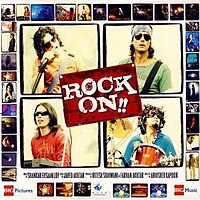 The way this genre of music has been portrayed will do a lot of good to its image. It’ll break the myth that equates Rock n Roll to sex and drugs, and limits its domain to sub-genres like Death Metal, Heavy Metal etc. which are perceived as a portrayal of sheer noise for the uninitiated. The movie will help the junta identify the Indian rock scene and respect the genre as a source of meaningful lyrics and passionate music instead of head-banging and mosh pits.