I bought tickets and saw the movie ‘Prince’ in its entirety.
But WHY!!??
I don’t know, may be I didn’t have any thing better to think of at that impulsive moment.
But WHY!!??
It has rekindled my urge to blog. I thought of bashing it with a review, but should that be my approach?
One needs to handle such cases sensitively, so I tried hard to empathize with the filmmakers – what would I have done, had I been the filmmaker? I thought aloud, in my mind.
Finally, for the sake of sounding sensitive and realistic (like the one- day CM), I cooked-up listed these business propositions, and chucked the conventional review.
END_OF_DOCUMENT_TOKEN_TO_BE_REPLACED

The Movie: Rock On

Plot Preview:
The movie oscillates between the successful present and the happy past of ‘MAGIK’.
Magik is a band formed by the four protagonists in their early twenties, when they escaped the quarter age crisis by doing the thing they wanted to do.
The band that rocked the crowd and set the stage ablaze moved apart for self centric reasons to give some of its members a successful and ‘well settled life’: the life without a calling.
The story takes you across the split and merger of MAGIK with the magic of meaningful music combined with a coherent sense of direction.

END_OF_DOCUMENT_TOKEN_TO_BE_REPLACED

Every once in a while comes a Hollywood flick with almost pure (read: animation-free) action sequences to give the fussy critics a ‘reality check’, but Die Hard 4.0 goes a step ahead ; it revolves around the growing importance of digitizing the analog globe with minimalistic digital action sequences.

A stereotypical loner (like Raghavan from Main Hoon Na), who is also a code wizard, gets thrown out of the US defense Systems department because he hacks his self designed computer network using just a laptop to prove that it is vulnerable. So whats the big deal? Well, this network governs the entire Nation and yet the government is not ready to fund this guy to build a better system.

So now Mr. Code wizard gets his ego up his head and lives with the motto of destroying the network (read: hacking in and controlling)

He starts off with the transport routes jamming all the routes surrounding the White House. Then comes the communication networks and radio frequencies. He gains access to all TV channels and displays his version of the news: The White House being blown apart– more panic. Now he moves on to electricity and has his eyes on the gas pipelines. The world’s superpower is declared to be under attack.
But wait, this movie is not all about the bad guys wining and winning till the end. John Mclean (Bruce Willis) bumps into this code kid who happens to be a competitor to these virtual terrorists .

The white hat hacker somehow manages to beat the system by configuring his PDA to establish a network via the satellite (thats until the terrorists cut that path and locate him).Now begins the action.

A typical boom-bang-thud-i stand up again movie DH4 lives up to the Die Hard series. Although the movie is technically sound, there are a few goof ups that make it look artificial ; like the scene where the fighter/bomber aircraft flies as low as the flyover to bombard the trailer, or the car-killed-the-chopper chopper scene. Had this been a Bollywood flick, critics would have blown its revenues apart, but thankfully it ain’t. Finally it is not a bad watch if you are lazing at your electricity-ridden place with the city flooded and off course a generator-run multiplex at a stone’s throw.

Disclaimer: The views and opinions expressed are solely the author’s and are subjective.They are not intended to influence,offend or hurt anybody living or dead.The articles may have a tendency to be satirical and or sarcastic. 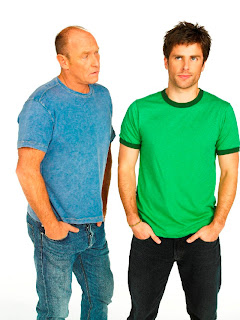 Shawn Spencer (James Roday ) is very much like an average bloke in his twenties with a charismatic persona except from the fact that he possesses an innate ability of observing and successfully retaining the minutest detail in the surroundings. But for his father, Henry (Corbin Bernsen) , this feat is the result of the training imparted, than his genes .Thanks to his razor sharp senses, he is able to pin point the culprits from the corner of an over a news bulletin while his blonde girlfriend is over him.
Spencer kept on tipping the cops while he went hop-skip and jump through the 36 jobs he took after high school until this day when the cops suspect him of being an accomplice terming his tip as an inside information. The witty Shawn however tries to convince the cops that he is psychic and bags a kidnapping case from the still skeptical chief of police. He gets his childhood buddy Gus (Dulé Hill) who reluctantly joins him on the case and then in guarding the ‘psychic’ secret. Spencer solves the case in a weird (dramatic) style : asking impertinent questions, hitting on the victims sister and yes, cant miss the psychic pretence. All of this drives Gus crazy getting him the fits and the viewers the drama sufficient enough to draw the un-types in for a mystery series. Later on Spencer goes on to open his Investigation agency ‘PSYCHE’ forging Gus’ signatures to make him a partner and thereby dragging the poor chap into what could be an adventurous ride for their careers.
The series is Star World’s attempt to relinquish the many detective concepts being aired by giving it a fresh perspective through the ‘comic-drama’ genre. Although Spencer’s antics might just remind some of you of one Detective Omkar Nath (I’m not suggesting things), yet this typical American kid and his chicken hearted partner have something for you to be glued to the IB for an hour and a half.
Disclaimer: The views and opinions expressed are solely the authors’s and are subjective.They are not intended to influence,offend or hurt anybody living or dead.The articles may have a tendency to be satrical and or sarcastic.