Barcamp Mumbai 3 is coming on the 29th March,2008 at IITB campus.The good news is that it just got bigger from its previous versions. Here are some highlights: 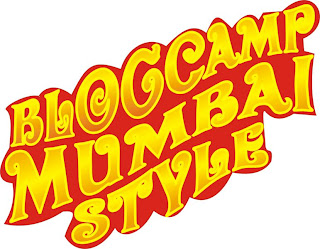 PS: IF you have a question that goes like “WHAT IS BARCAMP?”
Ive written a paragraph from my first experience.
Tarun Chandel has summarised it beautifully (= precise and concise). 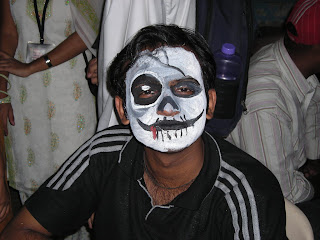 If you heard the chants of “Aamchi aai tumchi aai, Veermata Jijabai” on the 1st and 2nd of Feb this year, then you probably were hanging around in Matunga, in the vicinity of VJTI. The sounds were getting ‘reflected’ from Pratibimb , the annual intercollegiate cult fest of VJTI, that saw over 15 colleges participating. The crowd was low in number but the VJTIans certainly knew how to dhamaal. This year, Pratibimb manifested a lot of creative events spread across various domains and they were all pretty smoothly managed.
Day 1 saw people running around the campus playing detective in the event called F.B.I. While the classroom events were buzzing on and off with participants, the quadrangle looked pretty empty (see pic). Mega events like The Apprentice (similar to the one by Trump and there was some CEO judging a round too!) and Press conference kept the participants busy for both the days. Press conference tested the journo-capability of the participant by means of tasks ranging from debating, attending a press conference and acting elite journos in a (M)UN session :shooting queries to the delegates in order to write a report. The quadrangle was catering to mega events like solo singing and blast of bands contest; however the lack of crowd in a decent number just made it look like an ordinary event during the afternoon. However, the few people were evacuated from the quadrangle to enable security check for the blast of bands in the evening. As usual, the quadrangle was arranged to divide the guys and girls into physically isolated regions, with the section behind occupied by the impulsive dancers. The contest saw a few amateur bands trying hard to rock the crowd, but the VJTIians ain’t that easy to please. ‘Ehsaas’ , a 3 day old band, bagged the trophy given to them by members of the band Talaash who were judging the contest. Later the MC introduce 64-bits as an ‘angrezi band’ for those left behind by the 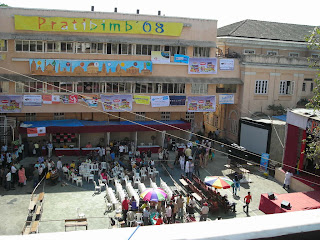 ‘angrez’ (did someone talk about globalisation?)However, the treat of the day was Talaash, they rocked the juntaa to the core.
Day2 marked the continuation of Press conference, The apprentice and the culmination of other events. The crowd wasn’t seen in the quadrangle until the evening, so participants of events like the personality contest missed the desired crowd encouragement .The MUN club of VJTI had organised the VJ MUN which saw the session of the security council on day 2.The event was brilliantly planned and executed ; in fact, at first sight, the conference room seemed like the actual UN council conference room( maybe because I haven’t seen the actual one for real )The delegate of USA from RJIT won the event bagging a crystal-glass trophy and some goodies. The evening was euphoric! The solo and group dances were won by some scintillating performances from VESIT. The catch of the event came in the end: NEON DANCE! You should have been there to see the awesomely unbelievable performances by BES College,Borivali and Tolani college who jointly won the event. BES’ performance was centred on FIDO DIDO and they live performed the ping-pong matrix video from Youtube in addition to the triple role dance by Fido. Tolani’s theme was based on the co-existence of aliens and humans , but the crowd was turned on the moment they performed the MARIO! An entire level of Mario , including the 1ups,kicking the mushrooms, speed ups, headers to the ?-bricks all synced with the original background sound of the game was performed live!

Overall Pratibimb ’08 was a fun place to be and has certainly come ahead from its previous versions. Known faces like Arzoo Govitrikar, members ofAasmaa , Ruslan(MP3 fame) etc were seen during the fest. However, there exists some scope to improve: Most events were judged and headed by second/third year students and VJTIians were allowed to participate; this obviously was the reason why external participants cribbed of biased results. The MCs can be given a crash course on anchoring a ‘mega’ event with due emphasis on learning newer action words other than variations of ‘rock’. The prize money concerned a few participants, as the amount seemed to be too low to accept (for some).With such a varied kitty of events, a couple of Crossover events can certainly be implemented with very little brainstorming. Given the capability of the VJTI students, with these factors taken care of , Pratibimb surely looks to grow faster and get even more impactful with time.
Disclaimer: The views and opinions expressed are solely the author’s and are subjective.They are not intended to influence,offend or hurt anybody living or dead.The articles may have a tendency to be satirical and or sarcastic.