Since the start of Feb,2008, there has been a lot of ‘buzz’ about entrepreneurship in the lands of VESIT. The launch and inception of The VESIT Entrepreneurship Cell (tVEC) finally took place after nearly four years of float-hood. Does it mean that VESIT has been hit by the entrepreneurial wave that’s spreading the world over? Have VESITians discovered a new career alternative that is poised to aid India becoming the next superpower?

The answer to those questions depends on the attributes of the aforementioned ‘buzz’. I decided to mingle with fellow VESITians to find out what exactly were they thinking about tVEC after the various smses, emails and word of mouth messages that were sent across inviting them to join in for a couple of activities and to apply for tVEC Associate without a formal orientation. Here are a few responses in random order:

“I got a 70% and the highest in my class is 78%.I don’t think I should engage myself into any activity now onwards.”
“I want to join in as an associate for tVEC, can you tell me something about this ‘society’ and what exactly is entrepreneurship?”
“Would I get a job through this organisation?”
“Why should I join in, what’s in it for me?”
“Keep up the Good work!”
“I’d like to interview an entrepreneur; it’ll be like an IV!”
“My whole class is suddenly obsessed with flash cards and CAT! Where are the wannabe entrepreneurs of our batch really? Are there any at all here?”
“Aspiring for a better life is an entrepreneurial quality. I guess the whole class is on the right track.”

This experience taught me the importance of having FAQs on the website(tvec.vesit.edu), which was achieved immediately. However, this space should be used for a better purpose and so I’d rather focus on the brighter picture: A peek-a-boo on entrepreneurship and my escapades.

Enterpreneur:
Microsoft®Encarta ® defines him to be an individual who sets up and finances new commercial enterprises to make a profit; but I’d like to differ and define him as an individual who creates value and win-win situations by taking risks to optimise his resources. There is more than one way in which the term entrepreneurship has been defined, but each definition caters to the central idea of value creation.

I have an Idea but the bulb wont glow:

Entrepreneurship is often restricted to starting up a venture, so the first obstacle faced has to do with the idea. A student, who got four IIM interview calls, couldn’t see a point in associating himself with an entrepreneurship cell because he doesn’t have an idea. I think this guy represents a fair chunk of the student population who stop because of lack of ideas. The irony popped out when Vishal Prabhukhanolkar (Director, TenADay.co.in, Quetzal Online) told me about the fact that most students ,making it to a top B School interview, express their desire to be entrepreneurs when asked about their near future plans ( and the others are trained to say so). There is indeed some ‘cool’ associated with entrepreneurship if it is the ideal career alternative, at least for an interview. We’ll look into this at a later point.
A famous adage goes like “When you are thinking of an idea, someone is already implementing it.”

It sounds very smooth on the first read but has loads of experience stored behind it; a few weeks back, I learnt this the hard way. My exasperation was heavily exaggerated when I saw my book trading portal concept (designed for VESIT), being implemented in Georgia Tech University and now graduating into a Facebook Application. I dug out the pamphlet that we had distributed to test the market 2 years back; the promotional contents also resembled each other. The next thing that struck me after this adage is a common piece of advice that every entrepreneur gives: ‘Seize the opportunity, and implement the idea’ i.e. don’t wait for the bulb to glow.

The above example also shows that starting up is not all about having an idea. (Four years of rigorously referring to’ substandard textbooks’ gives us a fair tip about getting ideas.)

Network to Connect and Collaborate:

An intriguing attribute of entrepreneurs is their ability to interact and build relationships on the go. This inherent characteristic differentiates them from those who lack the mindset. Jimmy Wales, the founder of Wikipedia promoted the culture of collaboration (commercially known as user-generated content) in his recent visit to Mumbai. It is this collaborative effort that led to an avalanche in the accumulation of information that each of us use even for mundane causes. The habit of collaborating and growing is very prominent amongst entrepreneurs, which is contradictory to the bureaucratic introductions. All it takes these days is a couple of clicks on ‘Linked in’ and you get your man. tVEC is experimenting with tVECTribe, an online virtual network to facilitate collaboration amongst students, alumni and faculty (tvectribe.vesit.edu) .

Timing the Plunge | Should I work for some time?:

The idea looks awesome. You think it is the need of the hour. The team is pepped up. The finance jugaad is not a worry. The picture is rosy, yet there are doubts .It’s absolutely human and normal to feel so. The big question is to worship Nike (‘just do it’) or give a second thought?
How one tackles this dilemma depends on the strength of the entrepreneur’s character. If you keep thinking twice, you might find your idea in a Georgia Tech. On the other hand if you ‘just do it’, then there is a chance of meeting the fate of ‘aTEEtude Inc.’-another escapade!

I floated this venture with two friends: a designer from Sir JJ Institute of Art and a management undergraduate. We provided designing solutions in paper projects and T-shirts and set our eyes to compete with greats like Tantra and design sweatshirts for every college/university. Just out of the 12th grade, starting up was more of a glamorous fad than a well thought of plan; it had more to do with the cool, associated with advertising and branding than the much required supply chain building. We realised our follies and tried to improvise; bagged a few orders (including my class t-shirt) and moved at a slow rate; but it faded away, it had to, as it was just a passing fad that taught us a few tricks.

‘Floating the idea is an essential tool to test it’
I experienced this while working on my ventures and interning at start ups. My most recent intern stint was at MagNet Technologies, a 10 year old start-up, where I was evaluating the techno commercial feasibility of a VOIP based enterprise telephony system- Another shot at float- to- test; but the here I got to learn a set of seasoned tricks for testing the feasibility of the idea.

The underlying idea is to get hands on experience. Practical learning (entrepreneurial or academic) doesn’t happen reading TechMax Publications or Vidyalankar notes, it is via work experience (internships and floating ventures) that one learns the tricks of the trade; moreover they also help you in evaluating your future path. The question is whether to learn driving in your own car or at the training school?

Its not the best thing to do when you decide to visit Elecrama on the last day, not only do u gasp at its humongous outreach as a first timer but you are also left asking for more.

Ive been postponing my visit to this international industrial electronics exhibition ever since my first year in Electronics engineering, but now in the final year , the guilt was to high to ignore, so i made a business class visit with my uncle.
Elecrama ’08 in its eight year had over 1000 exhibitors in addition to select student projects spread across the entire areas of the Bombay Exhibhition Center. That just explains why people ain’t done in a day(no pun intended).The event was held for four days and manifested a smooth and delightful visit for the guests.

VESIT has been consistently winning the trophy in the students category, and this year too they bagged the first and third prizes from among the five projects they submitted.The w 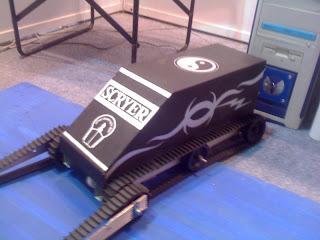 inners had designed an excellent solution for industrial power distribution by making it completely wireless(thats like wi-fi switch controls for machines from a central room). The runners up were from K.J Somaiya’s Baraccuda team (the F1 car they recently produced), but the project was to lame for the second place. Why would you replace a remote by a wheel-paddle setup to drive a toy car with a camera? Well engineers don’t take Economics too seriously, so real estate is literally a bubble.The 2nd runners up again from VESIT, had presented a prototype of an uber cool wireless telemetry system named ‘Scryer'(see pic). Apart from technical excellence, the VESIT exhibitors manifested professionalism in their attire, presentation ; they even had brochures stocked to distribute akin to the industrial exhibitors, that made my uncle ask what exactly was I doing in this engineering college,just to get back a smirk.

All said and done, this place is certainly worth a visit if you looking for some kind of a solution for your business or just wish to keep yourself abreast with the latest happenings in the industrial field

Disclaimer: The views and opinions expressed are solely the author’s and are subjective.They are not intended to influence,offend or hurt anybody living or dead.The articles may have a tendency to be satirical and or sarcastic.